Tis the season for giving thanks, so I wanted to share this little love letter that illustrates how instrumental the the Summit Workshops series has been in my development as a photographer.

This story is “kinda” about an image, but really more about the journey and experience behind it. 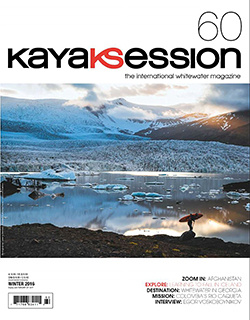 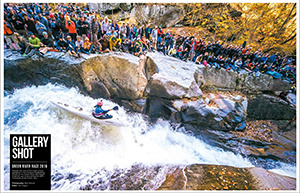 This photo was recently published in Kayak Session Magazine. I am very psyched to actually be paid for a photo, but more excited to see a lot of time and investment (that I never realized was required) pay off. In reality, this photo was built on the back of so many little supporting moments; much of those driven by what I learned in the Summit workshops.

Photography has always been an addictive hobby; a creative itch that I can never seem to scratch. That itch led me to join the Adventure Photography Workshop in 2014 where I thought I would learn a few “tricks” for taking better action shots. I did not realize how that first course would get my head out of the viewfinder and open my world-view to the business of photography. It is safe to say I was the ignorant pilgrim who was madly scribbling down every morsel that may have been obvious to most. @timkemple 's critiques and deconstruction of his work were mind blowing, @andy_bardon was the most encouraging guy I ever met, EVERY nightly presentation by the instructors inspiring, but the greatest insight came from Scott Willson who matter-of-factly stated that he will hire the second or third best talent every day of the week if they deliver and keep the team laughing when things go sideways. It was as if I were Dustin Hoffman in the Graduate:

I came back the next year for the Sports Workshop where I was introduced to an entirely different world of photography, and had the opportunity to meet Dave Black who has been inspiration from afar for years. Relationships continued to play a theme, but here the competitive nature of sports photography drilled the importance of studying the event/athlete, getting that early position, and most important: differentiation. Here, light became the weapon of choice, and every instructor added arrows to the quiver. Dave Black’s technique and enthusiasm are obviously contagious, Mark Reis' encouragement & critique so appreciated, but I was equally inspired by Joey Terrill’s attention to detail, love affair with light, and enthusiasm to connect with students.

So this year I had to come back to the lighting course. NEVER would have been of interest in 2014, but now I was hungry to learn more. Another great course with amazing instructors. Joey and Matt Hernandez (different backgrounds, equally inspiring) really took the time to help me understand my personal style while providing great critique and coaching to move forward.

Let it not go without saying that the students I have met across the workshops have been equally instrumental in this journey. I have made some great friends who continue to encourage and inspire me, and I hope that community continues to grow.

So let me tell you why this photo actually made it to press:

I had never used Instagram before 2014, so left the Adventure Workshop with a personal project goal of leveraging it to create a brand for my photography (@TimKemple & @edneyyap)

I started shooting limited river releases & races; then posting images to Facebook. Tagging frenzies ensued, and what seemed like overnight I had 200 new friends across the paddling community. All of a sudden people were paying me compliments (and in some cases dollars) by using my images as their profile picture.

@lucasgilman taught me the value of shooting faster, but more importantly to start talking with the boating and equipment manufacturers as their marketing savvy may not be as strong as one might think. Great advice as I started to supply a few companies with social media content and getting my name at least in the realm of known.

The Green Race is the pinnacle of Creek Boating success, and attracts hundreds annually to brave a class 5 hike into the gorge in order to watch the best pro and dirtbag paddlers compete for the top spot. I had been to the race before and was visualizing the shot I wanted to take over the next 12 months. I was confident I could set it up after talking with @CoreyRichProductions at the Adventure workshop about rigging and seeing similar shots he had taken. I had to get across the river before the dam was released in order to get to the spot no one else could access without paddling in.

I was not going to be the only photographer covering the race, so I hiked in the day before to set up my rigging. During the setup I ran into a number of racers making a practice run including the head designer for one of the kayak manufacturers. Took a few shots, wished everybody good luck. I decided to sleep in my car at the trailhead and headed down at sunrise on race day to assure that I “got there early, and stayed late” (@daveblackphoto, sorry, forgot my cookies…). As a result I was set up in my rigging well in advance and just watched others scramble for less optimal positions.

Race goes by in a flurry over the next 4 hours, no time to chat, just keep shooting. High speed to freeze that action, add a little light to pull that subject out of the background (@lucasgilman @joeyterrill @matthernandez).

The next day there is a flurry of messages across Facebook. Kayak designer and race organizers looking for a photo that shows the race winner dropping into Gorilla (“the” clutch rapid) with the crowds cheering them on. The funny thing is, I did not see any of these messages, but those 200 Facebook friends who saw me hanging across the river replied in unison that I had the photo they were looking for. Kayak designer e-mails me direct and the rest is history.

The photo was not the best of the bunch (white boat against white water…… ugh), but it was what the client was looking for and seemed to capture the spirit of the event. Bottom line, the only reason this image made it to the editor is because everything I’ve learned over the last few years at these workshops fell into place. Sometimes it happens, most of the time…… you keep trying.

So, as the year rounds to a close I want to say thanks and recognize that even the smallest of successes would not have been possible without recognizing the staff and instructors I have had the pleasure to learn from. The payout from this photo probably covered gas and a drive-thru dinner, but the friends and experiences I have gained on this journey over the last few years has been nothing short of priceless.

Thanks to everyone involved in the Summit Community and Happy New Years. I hope 2017 is challenging and rewarding for everyone, whatever your personal adventure may be.